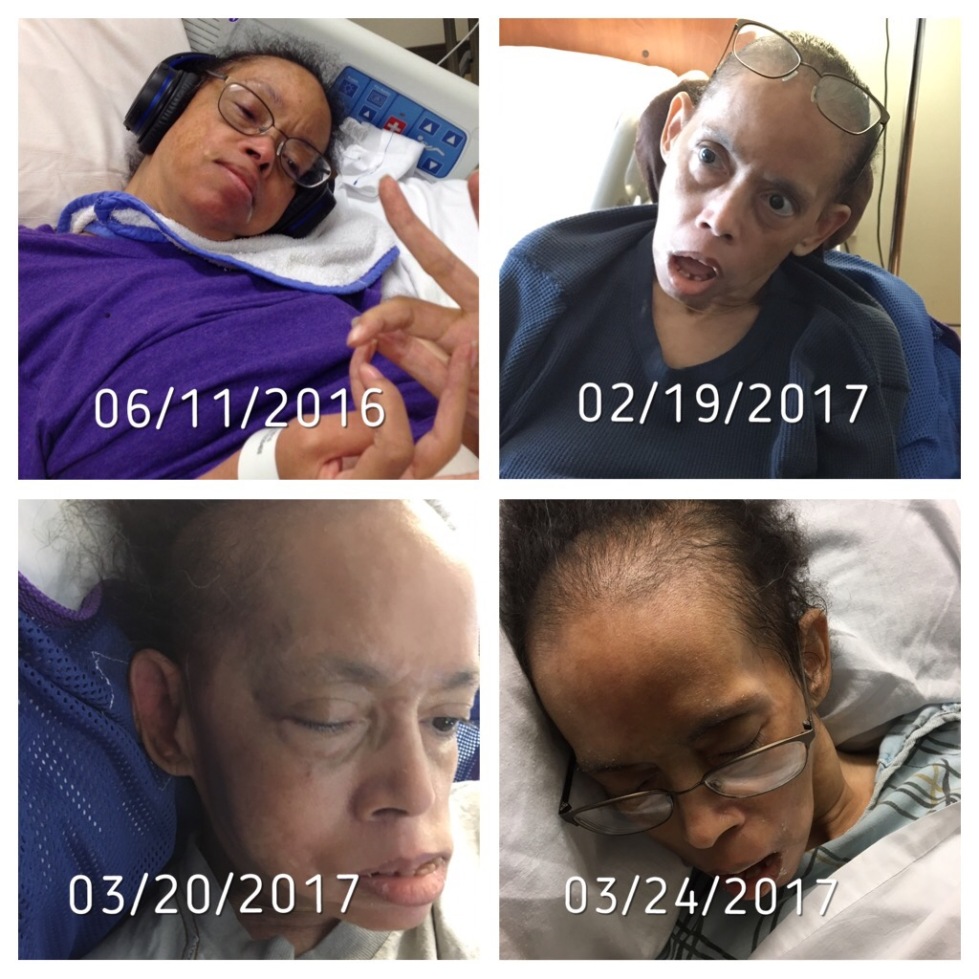 It has been 211 days, 7 months, since my sister Anastasia was abducted by Inova Fairfax Hospital and their designated guardians.  In that time she has suffered a severely broken hip, a broken ankle, the loss of sight in her right eye, loss of the use of her limbs, more bed/pressure sores and bruises than you can count; she has had all her hair cut off, been denied the ability to watch television with nothing to do but stare at drab yellow walls, has gone three months without her prescription eye glasses, has been denied care by her regular longtime physicians, and her blood levels (H&H) have dropped to critically dangerous levels at least twice and has been subjected to constant opiate administration.

In 4383 days, 12 years 8 months (145 months), my sister Anastasia suffered no loss of sight in either eye, had a single pressures sore that was promptly resolved, and suffered none of the issues she now suffers “chronically”.  She always got outside to see the sun, went for drives, saw her longtime doctors regularly, enjoyed watching movies, laughed, and smiled; her blood levels were not constantly dropping to critically dangerous levels, and she did not have opiates routinely administered.

Now math was not my strongest subject in school but 7 goes into 145 for a total of 20.71 times.  So… it took only 21% of the total time I used to keep Anastasia healthy for her health to run into the ground.  You do the math.  What does that tell you?

I saw Anastasia today and she looked pale.  She was moaning and crying out before she even reached the lobby as they wheeled her down the hallway.  I brought her previous pair of prescription eye glasses so she would at least have something and be able to see.  This cost the facility nothing because I already had the glasses, especially since it has been 3 months since they lost her prescription eye glasses and still have not replaced. them.  The facility refused to allow Anastasia to keep them and wear them apparently preferring she go without being able to see clearly.

I was also informed that her cable was not working.  Evidently the cable was not plugged into the cable box, and the cable box was not plugged into the television.  Now I paid to have Comcast/Xfinity professionally come and install the cable box.  While Comcast does have their issues not connecting the cable box and verifying the cable is working during installation is a first and not something I have every experienced or heard of before.  I called Comcast and made them aware of the problem and they are investigating and also sending another technician out on Sunday morning to fix the problem, especially since they have already billed me for the install.  We shall see.

In the past week I have been privy to and found out some very interesting information regarding the players involved in this saga for lack of a better word; not something I am able to share at the moment but when the time comes… Booyow!!!

I pray everyone has a blessed night and peaceful nights sleep.  As for me… waiting for exhaustion to take over